According to physicscat, Turkish interest groups have always devoted themselves to social and societal problems and projects, but mostly related to specific projects or needs. This area also includes the distinctive foundation system in Turkey, which is religiously or socially motivated and enables less beneficiaries to participate in education, culture and care.

Civil society engagement in the sense of political influence on the state, society and economy is a more recent phenomenon in Turkey and has been palpable since the 1990’s.

Particularly well-known and influential are the associations that have dedicated themselves to the subject of “gender justice”. The organization KA-DER deals with “women’s and children’s rights”. One of her high-profile campaigns aimed to increase the number of women MPs. Video spots and posters showed the activists creatively pointing out with a glued-on mustache whether you have to be a man to get into parliament. They were also involved in the revision of the family law and achieved that paragraphs such as “The legal head of the family is the man” were deleted. Currently on the agenda of the activists is a campaign aimed at rousing the public to protest against the abortion law that will pass parliament in the near future. The motto of the campaign is “My body – my decision”.

Mor Cati is an association that aims to protect women from violence. On her initiative, women’s shelters were set up where abused women receive protection and support. With public appearances and slogans such as “Erkek vuruyor – beating men”, they draw attention to the issue of violence in the family.

Gay Pride parades have been banned for several years. Lamda Istanbul works as an NGO for the rights of LGBTI people.

The topic of environmental protection is also slowly finding its way into civic engagement. Caretta Caretta, the turtle native to the Lycian coast, was to give way to tourism at the end of the 80’s until committed citizens successfully campaigned for it.

The anti-nuclear power movement has flared up somewhat with the Turkish government’s plan to build a nuclear reactor in Akkuya, but the protests against the dam projects also go unheard away from an intellectual city class and those affected locally.

In this area, ideological demarcations stand in the way of joint action. The actors are often located in political camps and fight each other instead of standing together: Religious – secular women’s associations, state-loyal – socialist unions, secular business associations TÜSIAD – religious MÜSIAD.

The protests of various sections of the population surrounding the events in Istanbul’s Gezi Park were an exception and thus a new beginning of civic engagement. Started in the spring of 2013 as a resistance to the deforestation of trees in the park in favor of a construction project, the campaign expanded to other cities. Images of police violence spread through social media as police officers used water cannons and tear gas to attack protesters. This led to people from different ideological directions and without membership in parties joining forces and publicly protesting against the autocratic and autocratic orientation of the AKP. The resistance also took creative forms throughout. The state has accused the philanthropist and patron Osman Kavala of having financially supported these protests and brought him to court for subversive activities. His Anadolu Kültür foundation supports civil society organizations and actors in the fields of culture and art.

Politicians have been trying to build a social security system since 1999. A reform of the social security system came into force in 2006. However, the system is not yet sufficiently efficient. The families continue to form the social network if the state funds are insufficient. This is all the more bitter for the ten poorest provinces in Eastern Anatolia, where just one percent of GDP is generated. State welfare such as child benefit, social assistance or long-term care insurance cannot yet be claimed.

Unemployment insurance was introduced in June 2000. Their distribution capacity is still insufficient because the number of contributing employees is too small to adequately support the many unemployed / underemployed people. In addition, no capital could yet be built up. In principle, the unemployed are entitled to wage replacement, sickness and maternity contributions, job placement and training and further education. The mandatory contributions for employees and the state are 2%, employers pay 3%. Unemployment benefit is 50% of net income and is paid for a maximum of 300 days. In 2014 the unemployment rate was 10.1%.

Pension amount and retirement age are currently being redefined (Law on Reform of Social Security 1999, Law on Social Security 2008). So far, women have been able to retire after 20 years and men after 25 years of professional activity – regardless of the age of the respective applicant. The reorganization with long transitional provisions for those who are already insured stipulates that new insured persons will in future only reach their retirement age when they turn 65.

The population of Turkey has increased steadily since the establishment of the republic. Today around 77 million people live in this area (1945: 18.8 million, 1960: 27.8 million, 1980: 44.7 million). The period of growth seems to be slowing down, as the current national average birth rate is 2.0 and population growth is stagnating at 1.5%. More than half of the population is under 30 years of age. Since this group of people will soon begin the family formation phase, an increase in the population can still be expected. For 2030 there is a forecast of 85-90 million residents.

This also means a challenge for the labor market, especially since youth unemployment is already 20% and modernization, internationalization and rationalization are likely to increase the problem. Over the years the degree of urbanization also increased, so that today more than 70% of people live in urban areas. The centers are Istanbul and the Marmara region, Izmir, Ankara, Adana and Gaziantep.

Households are becoming increasingly smaller, even if this varies greatly from region to region. In the western metropolitan areas of Istanbul / Izmir, an average of 3.7 people live in one family, in contrast to 7.5 people in the eastern Van.

The migration movements from the villages in the east to the cities and from Anatolia to the west are also noticeable in the population statistics. 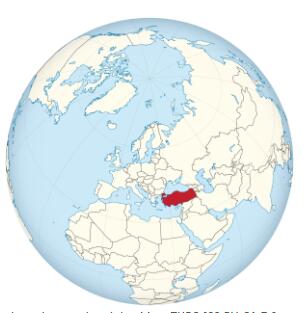