The Swedish Church was a state church until the year 2000 and a majority of the residents still belong to the Evangelical Lutheran Congregation. At the same time, Sweden is today regarded as one of the world’s most non-religious countries. Immigration has meant that Islam is now the second largest religion.

The first Christian missionaries came to Sweden in the 8th century. Christianity gradually pushed away the Old Norse asatron. When the country received its first archbishop in Uppsala in 1164, the new religion had finally gained a foothold. However, he was subordinate to the archbishop of the Nordic countries who had his seat in Lund, which then belonged to Denmark.

When the Reformation – the Protestant counter-movement to Catholicism – reached Sweden, King Gustav Vasa broke with the Catholic Church, among other things to access the church’s riches. After Västerås Parliament in 1527, the king became the head of the church instead of the pope. The Reformation took time and officially ended at Uppsala meeting in 1593. The new Swedish church was ruled by the state and gradually acquired a monopoly position.

During the 19th century, the revival movement began to grow strongly, and in 1860 it was allowed to leave the state church on condition that they entered a Christian community recognized by the state. It was not until the Religious Freedom Act of 1951 that this requirement was removed. The state and the church were finally separated completely in 2000.

Women were consecrated as priests for the first time in 1960 and 1997, the Swedish Church received its first female bishop, Christina Odenberg. The first female archbishop, Ante Jackelén, will take up the seat in Uppsala in June 2014.

The immigration of recent decades has contributed to a significant increase in the number of Muslims and Catholics in Sweden. The figures are uncertain as no statistics are kept on religion. Around half a million people in Sweden have their roots in Muslim countries and environments, of which just under a third are estimated to be practicing Muslims to some extent. The number of practicing Catholics is estimated at around 150,000, of which a large majority are first or second generation immigrants.

The largest among the traditional free church communities are the Pentecostal movement (cikra 81,700 members in 2017) and the Equmenia church (about 61,500 members in 2018). The Equmenia Church was formed in 2011 at a merger of the Methodist Church in Sweden, the Swedish Baptist Society and the Swedish Mission Church. 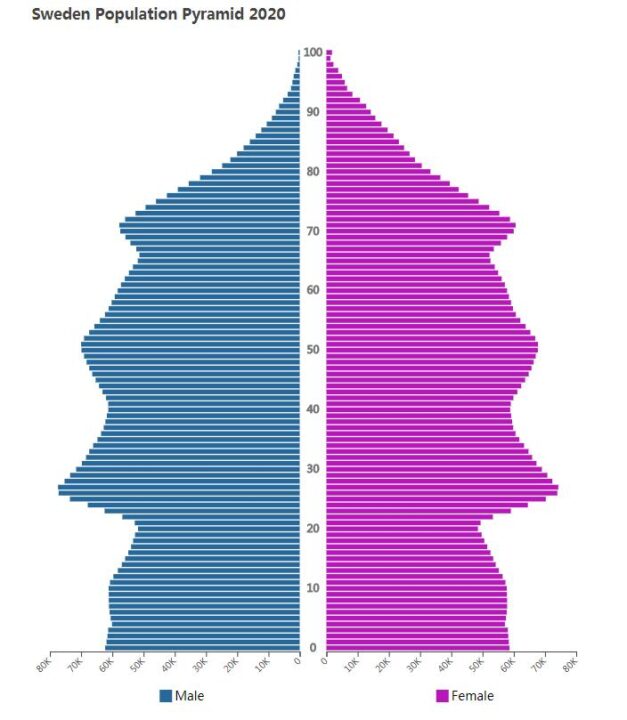 The palm tree investigation is closed

The investigation into the assassination of Prime Minister Olof Palme in 1986 is closed, preliminary investigator Krister Petersson announces. The reason is that it was concluded that the murder was probably committed by a man who died in 2000, Stig Engström. Many are critical of the message as Peterson, through statements in advance, led many to believe that more concrete evidence would be presented. Others also question that a deceased person, who cannot defend himself, is singled out for a serious crime. Stig Engström, called Skandiamannen, was present at the murder scene and figured at an early stage as a witness in the investigation and in the media context.

The government dissatisfied with the EU’s pandemic package

Prime Minister Stefan Löfven expresses the government’s dissatisfaction with the high contribution levels in the pandemic rescue package presented by the EU, totaling approximately SEK 7,500 billion. Sweden, together with Denmark, the Netherlands and Austria, opposes the fact that over SEK 5 billion is intended to be paid out of a recovery fund, with no claim for repayment.

The number of people who died in the ongoing corona pandemic has passed 4,000, says the Public Health Authority. More than 90 percent of the deceased were over 70 and three out of four had home care or lived in a retirement home. Sweden has attracted international attention due to the death toll, which counts per capita among the highest in the world. The figures are well above the Nordic neighboring countries. Unlike other countries, preschools and schools up to the ninth grade have been kept open, and no business operations have been forced to close. Recommendations have been issued to limit interpersonal contacts, but no formal prohibitions other than to larger crowds and visits to elderly homes.

An amendment to the Contingency Protection Act is enacted which gives the government a mandate to take far-reaching measures on its own, such as closing public places, stopping transport and restricting public gatherings. The law, which applies for a limited time and relates to measures in connection with the corona crisis, is adopted with broad support in the Riksdag. However, this is only done after adjustments so that the Riksdag retains control power compared to the government’s original proposal. The Riksdag can now retrospectively review and possibly repeal the government’s measures. The decisions can also be appealed to the court.

Crowds are limited to 50

The limit on how many people may be gathered in one place is reduced from 500 to 50, as of March 29. Prime Minister Stefan Löfven also urges people to avoid unnecessary travel within the country, not least in view of the upcoming Easter weekend. Earlier this week it was also decided that food should only be served at tables in cafes and restaurants, not at bars. But Sweden has attracted international attention because the measures to prevent the spread of infection during the corona pandemic are limited, compared to most countries in Europe.

Crisis package to save companies

The government presents a crisis package of up to SEK 300 billion to try to alleviate the effects of the crisis in the coronavirus traces. The state assumes responsibility for sick pay, which is otherwise paid by employers for the first two months, pays half the salary to laid-off staff and provides companies with deferral of tax payments, such as VAT and employer contributions. The crisis package represents an extension of the support in the form of loans of up to SEK 500 billion that was promised three days earlier. Sweden does not introduce as severe restrictions on freedom of movement as many other countries in Europe, but recommendations are made on preventive measures to reduce the spread of infection in society. The next day SJ stops all train traffic and colleges and colleges are invited to switch to distance education only.

The Riksbank decides to lend up to SEK 500 billion to companies via the banks, and Finansinspektionen reports on easing of the banks’ capital requirements, which temporarily strengthens the stock exchange. Generally, stock markets around the world are swinging after the powerful race the day before.

The Stockholm Stock Exchange falls by over 11 per cent, the largest breed that has occurred in modern times. Heavy stock market crashes occur worldwide, due to the turbulence surrounding the new corona virus that has worsened after US President Donald Trump introduced an entry ban from the Schengen countries (see US Calendar). The government announces measures to curb the spread of the virus. Meetings with more than 500 people are prohibited and the waiting day in the health insurance is canceled. Companies receive deferral of tax payments for up to one year, and regions and municipalities receive extra grants. The additional budget presented is estimated to cost around SEK 3 billion. During the day, the first death in covid-19 in Sweden is noted.

Criticism against China after judgment against book publishers

The Foreign Ministry once again calls on China’s ambassador Gui Congyou to reiterate the demand for the release of Swedish-Chinese book publisher Gui Minhai. This has happened since Gui Minhai was sentenced to ten years in prison in China, where he has already been in prison for four years (see November 2019). Gui Minhai must now have been convicted of having disclosed unauthorized information to foreign powers. The EU has also protested against the verdict. Gui Congyou, who has been Stockholm’s ambassador since 2017, has been called to the Foreign Ministry over 40 times, including in January. Then he had come up with what were called “unacceptable threats” to Swedish media. Foreign Minister Ann Linde wrote in a comment that Sweden as a sovereign state cannot accept threats, and that the Foreign Ministry has explained to the Chinese ambassador that freedom of expression is constitutionally protected. The Swedish Democrats, the Christian Democrats and the Left Party have demanded that the ambassador be expelled from Sweden.

Verona The northern Italian city of Verona (260,000 inhabitants) is located in the Veneto region on the banks of the Adige River. […]