Modern Dutch architecture begins with HP Berlage, a student of Cuypers. His point of departure was a rational, non-individualistic attitude to the construction task, which focused on the importance of craftsmanship, especially the tradition of brick building. Berlin’s main work, the Amsterdam Stock Exchange (1903), was originally an example of the Dutch neo-Renaissance, but has since been simplified in line with his focus on spatial qualities instead of the facade expression, and in the large stock exchange he combines the use of bricks with freestanding steel beams in ceiling. 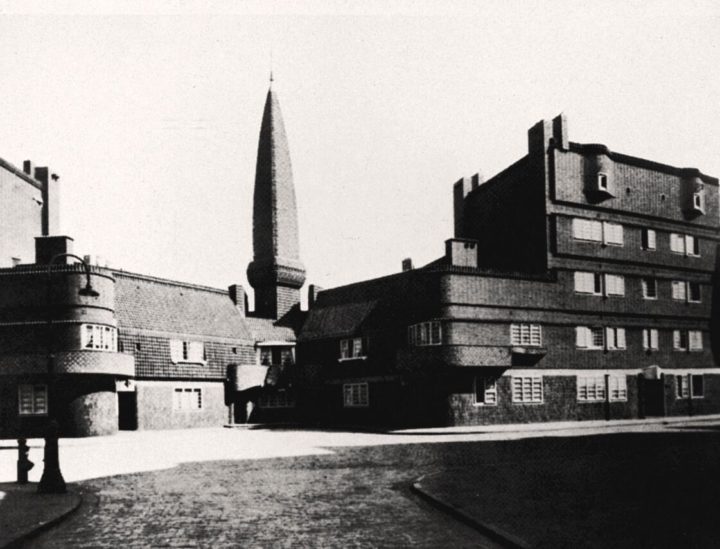 Berlin’s contemporary, Willem Kromhout, gave the buildings a more individualized expression. Hotel American in Amsterdam (1898-1902), is a good example of his way of modeling a cubic basic form, and at the same time marks a transition between European art nouveau, which was never actually found in the Netherlands, and the Amsterdam school that followed up Kromholt’s criticism of Berlin’s rational, objective architecture.

Among the best examples of the expressionist use of free forms that characterize the Amsterdam School are Michel de Klerks two housing estates in Amsterdam, Eigen Haard (1921) and Dageraad (1919-22), the latest in collaboration with Pieter Lodewijk Kramer.

The Amsterdam School was criticized for its superfluous ornamental use of bricks and lack of constructive consistency. by a group of younger architects who from 1917 gathered around the architect Theo van Doesburg and his journal De Stijl. Their program was, more in line with Berlage, a rational, universal style of architecture. Some of the architects in the group were also influenced by Frank Lloyd Wright, most clearly we can see this in J. Will’s residence Papaverhof in The Hague (1919-22) and the Olympic Stadium in Amsterdam (1926-28), and R. van Hoff’s Villa Henny in Utrecht (1915-1919). However, the most distinctive work of this period is Gerrit Rietveld’s Schröder house in Utrecht (1924), which, with its composition of vertical and horizontal surfaces and the use of primary colors, shows the great influence that the painter Piet Mondrian exerted on the group.

JJP Oud had been a member of De Stijl, but broke out because of what he perceived as the group’s reality-removing aestheticism and, together with C. van Esteren and Mart Stam, became one of the leadership figures in functionalism. Ouds residential area Herelst in Rotterdam (1928–29) is one of the best examples of social housing in the period. Other important works that contribute to reinforcing the importance of the Netherlands for the development of modern-day modernism are Jan Duiker’s sanatorium in Hilversum (1926–31) and LC van der Vlug’s Van Nelle factory in Rotterdam (1925–31). More special and distinctive regionally is Willem Marinus Dudok’s main work, Hilversum City Hall (1930), which with its asymmetrically assembled volumes and the use of bricks also shows the influence of Berlage and De Stijl. 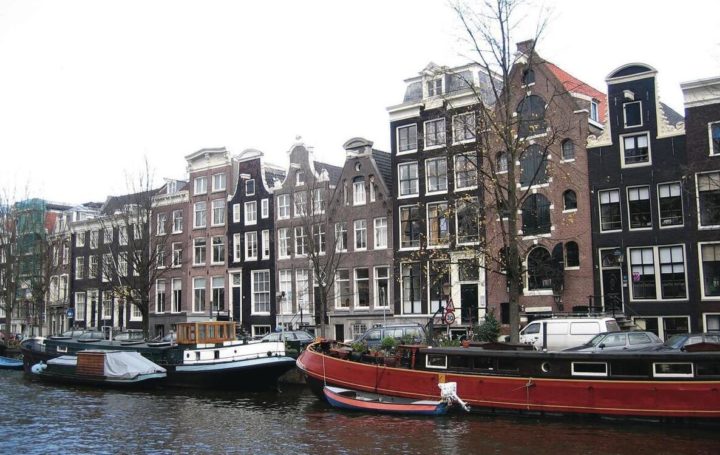 Characteristic development along one of Amsterdam’s canals. Along the canal are houseboats, which are also a common feature of the cityscape.

In parallel with the development of functionalism, some architects worked to revive the tradition of the turn of the century, and from 1924 we talk about a Delft school headed by MJ Granpré Molière, who was a professor at the city’s technical college. When public housing programs were discontinued in the years leading up to World War II, modernism lost an important arena, and traditionalists gained ground. In addition to returning to the country’s own tradition, impulses were drawn from Scandinavian architects, and the Boymans-van Beuningen Museum (1928–35), designed by AJ van der Steur, and the town hall in Enschede (1928–33), designed by Gijsbert Friedhoff, shows clear influence from the Swedish architects R. Østlund and G. Asplund.

The period immediately after World War II is marked by the planning of ambitious restoration efforts. C. van Esteren’s plan for the expansion of Amsterdam westwards from 1934 was now implemented, and JH van den Broek and Jacob B. Bakema prepared a plan for large parts of the center of Rotterdam. The planning work was in both cases based on CIAM’s ideas, and Broek and Bakema’s subsequent center development, Lijnbaan (1951–63), formed a pattern for similar center developments in other countries. The schism between traditionalists and modernists was gradually erased as the traditionalists also used modern technology to achieve the goals that the restoration brought.

Along with Bakema, Aldo van Eyck was a member of Tem Ten, a group of ten young architects who organized CIAM’s tenth congress in 1965. Van Eyck sees himself as a modernist, but so early the need for an extension of the architect’s tools and architecture register, and the orphanage (1955–60) and especially the maternal home of Hubershuis (1981), both in Amsterdam, has a complexity and lushness that points beyond contemporary international modernism. Van Eyck has had a decisive influence on Herman Hertzberger, who, from a structuralist point of view, shapes buildings as urban organisms.

Recent Dutch architecture shows a fundamental anchoring in the ideas of modernism as these have been developed all the way from Berlin’s time. Through the decades of postmodern rebellion, and not least through Van Eick’s works, architecture has been added to a greater variety and a more personal expressive expression, which nevertheless does not fall into the usual postmodern urge for pure scenography. Examples of this renewal of modernism are Rem Koolhaas (the OMA office), with the dance theater in The Hague (1987) and the housing block Byzantinum in Amsterdam (1991), and the office MECANO’s restaurant on the waterfront in Rotterdam (1990). Jo Coenen’s design of the Dutch Institute of Architecture in Rotterdam (1993), with its collage-like compilation of different volumes, is a visualization of principles in modern architecture. 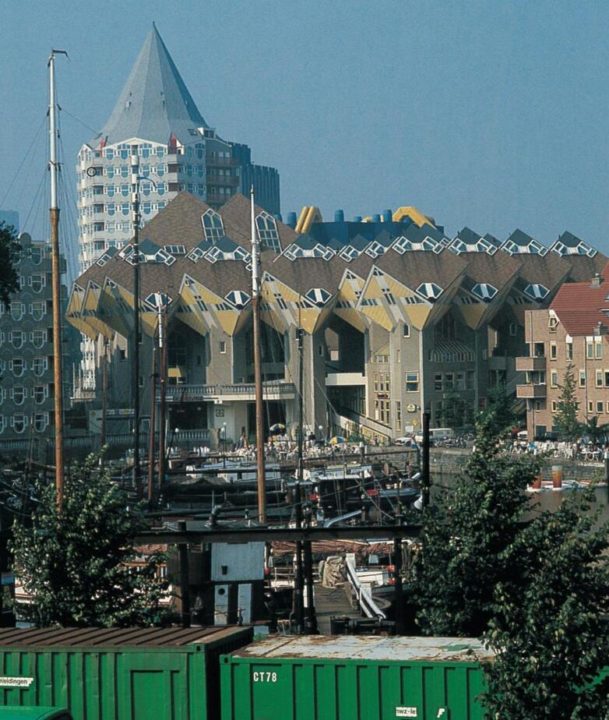 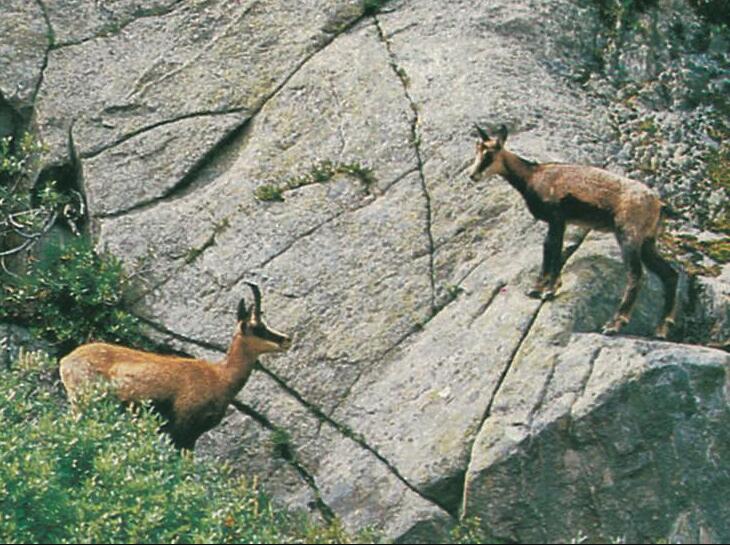 Nearly nine out of ten residents of Romania belong to the Romanian Orthodox Church. Over half of Hungarians in the country are […]