France is a predominantly Catholic country. However, the proportion of church activists has declined significantly. More than a third of the residents reported missing religious affiliation. Freedom of religion is guaranteed in the constitution, but restrictions on freedom have been debated in recent years. Islam is the second largest religion.

The church was separated from the state in 1905, and it is considered an important constitutional principle that state and religion are separate. The state must not keep statistics on citizens’ religious affiliation.

It is estimated that between half and two thirds of the population are Catholics. The number of Muslims is estimated at 5–6 million. Of these, perhaps one third practice their religion. Most Muslims originate in the former colonies of France, mainly in North Africa. Among the Jewish population, fewer than half are estimated to be practicing. There are also a number of non-Catholic Christian communities in the country. Most are Protestant, mainly Reformed but also Lutheran and Free Church, but there are also Orthodox Christians. In addition, there is a group of Buddhists.

After intense discussions about whether Muslim students should be allowed to wear a headscarf or veil in school, a law was passed in 2004, which prohibited all religious symbols in state schools. In 2010, a law was also passed which means that women who wear burqa or niqab (comprehensive garments that also hide their face) in general are at risk of fines. The European Court of Human Rights ruled in the summer of 2014 that the ban on bans did not violate religious freedom. 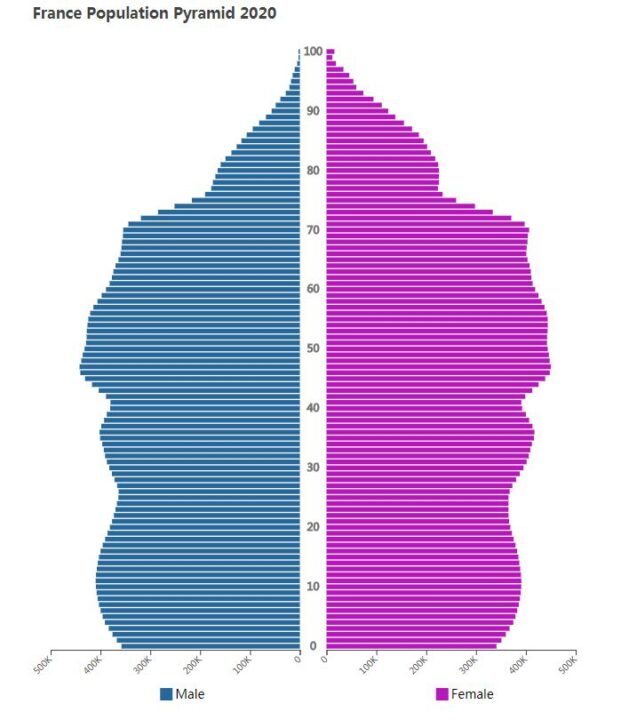 In the summer of 2016, a debate also arose about the use of burkinin, a comprehensive swimsuit that has become popular with some Muslim women. About 30 French seaside resorts had banned burkinin, among other things because it was not considered compatible with the country’s secular values. Opponents of the ban claimed it was a rash of Islamophobia. The Supreme Administrative Court ruled in August of that year after reviewing the city of Villenueve-Loubet’s Burkina ban that this was illegal, but it was unclear whether the verdict would be followed by other cities.

The government is leaving

Prime Minister Édouard Philippe of the right-wing Republicans is filing his and the government’s resignation application after a meeting with President Emmanuel Macron. The measure is seen as a step for Macron to reinvigorate the political initiative ahead of the presidential election in 2022 through new initiatives. Philippe has a higher opinion in public opinion than Macron and will lead the government’s work until a new minister is appointed. Already on the same day, it becomes clear that Philippe’s party mate Jean Castex will take over as head of government. Macron’s party, the Republic on the road (LREM), did poorly in the local elections at the end of June.

Defense Minister Florence Parly announces that the supreme leader of the al-Qaeda terror network in Islamic Maghreb (Aqim) has been killed by French soldiers. Algerian Abdelmalek Droukdel was killed in northern Mali near the border with Algeria along with several high-ranking leaders within Aqim, which also includes other militant Islamist groups. These groups have carried out several terrorist attacks in the region and kidnapped Westerners. According to Defense Minister Parly, one of the leaders of “the second biggest terror threat in the region”, the Islamic State of Greater Sahara (ISGS), was also arrested in May. France has captured or killed nearly 5,000 soldiers in the area and hundreds of jihadist marches have been captured or killed by French troops over the past year.

At the beginning of June, restaurants and cafés will reopen in much of the country. But there are still areas, like Guyana and Mayotte, where restrictions still remain and even in Paris, where outdoor dining is only allowed. The number of dead in covid-19 is now reported to be 29,000. In addition, crowds of more than ten people are banned until June 21, while face protection on subways, buses and commuter trains is mandatory.

Restrictions ease in some regions

The number of sick people in covid-19 is decreasing, which means that the government decides that the restrictions (see March) should be gradually lifted, taking into account the situation in the regions. These are divided into red or green zones, depending on the spread of infection and on the burden of health care. In red zones, several restrictions still remain, while elementary and preschools and shops re-open in the green. Restaurants and bars are still closed and gatherings with more than ten people at one time are prohibited.

Both chambers of Parliament approve legislation that gives the government extended powers in the fight against the coronavirus. The law means that the country is put in a two-month long state of emergency, which, among other things, allows the government to directly decide on support for crisis-hit companies. The number of infected people has increased in recent days and is now estimated to be around 16,000 while 670 people have died from covid-19.

Municipal elections are held despite the corona crisis

The first round of the municipal elections takes place as planned, even though the authorities have imposed restrictions to plan the spread of the corona virus. But turnout is low, only 45 percent. The Greens are strongly ahead in the elections, especially in Bordeaux, Grenoble and Lyon. In Paris, the current Mayor Anne Hidalgo of the Socialist Party looks to have good chances to stay. A second round of elections is scheduled for March 22, but it is highly uncertain if it will be implemented given the spread of covid-19.

Schools are closed to fight the corona virus

President Macron announces that all of the country’s schools and universities will be closed as a result of the spread of the corona virus. Macron says this is the most serious health crisis in the country in over a century. In addition, there are recommendations that people over 70 should stay at home. Since the beginning of March, the number of residents carrying the corona virus has increased significantly. Now nearly 3,000 people are reported to have been infected by the virus while some 60 died in covid-19 (the disease caused by the virus). Already at the beginning of March, hundreds of schools were closed in affected regions.

Chinese telecom giant Huawei is launching a factory in France with the production of base stations for 5G networks. At least 500 people are to be employed and the investment includes at least EUR 200 million. It is not yet known where the facility should be located. According to Huawei, the factory will be set up regardless of whether the French government decides not to use the company’s equipment in a 5G mobile network. The United States has warned, among other European countries, about Huawei delivering 5G due to the risk that the Chinese regime could exploit this for spying, among other things.

A quarter of a century after the collapse of the Soviet Union, the Russia presents the traits of a profound transformation together […]